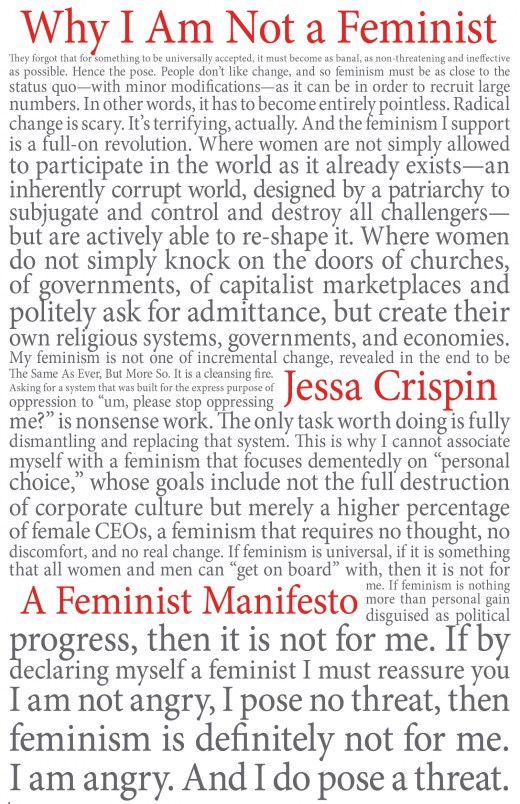 So I was on a bit of a roll with feminist books, I started two others at the same time as this one, but have yet to finish them. The name of this specific book is a little misleading given that it is in fact about feminism and feminist theory. Specifically, it is a critique of modern, liberal feminism, which is often times associated with intersectionality and the third wave movement. Crispin provides insight into why third wave feminism is less effective than the second wave movement and explains why given the modern definition of feminism, she does not want to be affiliated with the current movement.

Relating to my own life, I was raised in the era of third wave feminism, however, unlike most women my age, my mom had me late and life and was active in the second wave movement. Her opinions and the books that I found lying around our house influenced my views on feminism, sexuality and gender. I have always been more closely aligned with second wave feminism despite my age and have adopted many radical feminist views because of how I was introduced to feminism.  Crispin and I share a same general dislike of modern feminism and the individuality obsessed nature of modern feminists. Betterment for one woman does not automatically result in betterment for all women and the goals of modern feminism, to legislate equality, don’t align with my own views on abolishing the patriarchy. I do not believe that legislation will result in equality because it is like putting a bandaid over the bigger societal problem.

It can be easy to fall into the trap of thinking that adapting to patriarchal culture and gaining positions of power will result in greater equality among the sexes, but frankly there can never be equality in a patriarchal system. This book does a really great job of explaining this concept and I really enjoyed the first 75% or so of the book, however, Crispin’s argument is weakened in the last 25% due to the fact that she chooses political correctness over honesty on major issues that divide feminism, such as transgender politics, sexuality politics, sex work policies and similar issues. It is hard to fully enjoy her book when she has failed to end on a strong note.

I am not sure what to rate this book, so I won’t. What I will do is recommend this book to any third wave feminists who have interest in the views of other millennial women who perhaps are more aligned with second wave theory. It is a good intro to radical feminism and the idea of gender liberation.

Up Next: Dead Letters by Caite Dolan-Leach (4/5)